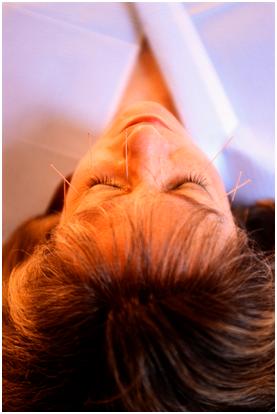 Our acupuncturists have training in facial acupuncture, and offer this popular technique whereby specialist acupuncture needles can be used upon the face.
Traditional acupuncture techniques are used in conjunction with the specific tailored facial techniques within this.  Facial acupuncture is an intensive treatment, and appointments take approximately 1.5 to 2 hours, and a course of treatments is usually recommended.
What is is about?
You may have read about, or seen this technique on popular television and in the press, as a number of celebrities and people in the public eye have been using it, including featuring a session taking place in the ‘10 years younger‘, programme on Channel 4 – the link leads to an interesting video of the procedure being done.
Facial acupuncture is not just a recent celebrity craze, however, it has been documented for thousands of years in traditional usage.  You may have become aware of it through its recent popularity over the last decade or so via the press, as many newspaper headlines have featured it, and such names as Kim Kardashian. Jessica Alba, Millie Mackintosh and David Duchovny, and newspaper columnists including Lynsey Clarke, having all shared photographs of themselves undergoing the technique, complete with facial acupuncture needles in situ.  Singer Katy Perry was even featured in her music video “Never Really Over” sporting facial acupuncture needles in her face (whilst singing) and receiving a tradition acupuncture adjunct of cupping therapy (we also offer cupping).
Is there any scientific research for this?
A Google scholar search reveals over 5,000 research-based articles regarding facial acupuncture (search term: “facial acupuncture cosmetic”; because using the term facial acupuncture reveals tens of thousands of research articles regarding other unrelated facial issues, e.g. Bell’s Palsy).  The volume of research in this field demonstrates this is an approach that not only is widely used, and that it has been deemed that research into possible outcomes and mechanisms of actions has been warranted to study scientifically.
When reading health research, it is important to know that Systematic Reviews or Meta Analyses of a large number of high-quality research studies are the very best way to be able to say to what extent a given treatment can address a condition, symptom, or set of symptoms.  The next best level of evidence is the individual Randomised Controlled Study (RCT) which uses a systematic technique to compare two or more groups of patients   receiving different treatments (or a treatment against a “control”, or no treatment). Looking in a scholarly research resource for Randomised Controlled Trials (search term: “acupuncture” + “facial” + “cosmetic” + “RCT”) yields 221 results, of which 77 since 2017.
There have been few systematic reviews in this area, and more are needed as the number of RCT’s increases, in order to examine them in a useful way.  A recent (Smith et al, 2020) meta analysis (review of a number of research trials) was carried out at American universities and heath centres, and looked at papers regarding facial techniques including acupuncture; they found that the use and demand for these techniques was increasing, warranting a closer look with scientific research, and they called for more trials to be done in this area as only four of sufficient quality were found for the acupuncture intervention, therefore the trend in positive results for acupuncture could be tentatively drawn. Ruan et al (2019) reached similar conclusions in a systematic review of 29 studies of different interventions including acupuncture, in the field.
Some trials, discussed in Smith et al’s (2020) meta analysis (e.g. Yun et al, 2013) are beginning to use objective measures on the skin such as Moire topography (a way of measuring and recording contour lines and possible changes in these).  Although the initial study was very small (Yun et al, 2013; n=27 participants) and did not have a control group (it was “single arm”) as it looked at changes in the women’s own skin after a course of acupuncture sessions to the face.  Comparing a group having treatment to a group having none is usually a better approach, although in one’s own case we are of course concerned with comparing changes in our own experience after a course of treatments. Changes in the topography of the skin were noted just over half of participants in this small trial, after 5 sessions of facial acupuncture.  The needles were placed in view to traditional acupuncture points (as per a facial protocol) which the researchers also noted in many cases corresponded to the facial muscles, which are known to be the the underlying supportive structures of the skin. The study was also limited by the fact that it only gave 5 sessions (8 or more are usually recommended) and the participants were self-selecting, so not necessarily representative of the population at large, which is the ideal case in a study.
Further research with objective measures would be very welcome in order to examine this is detail, and enable the traditional protocols that have been refined and used over a very long time period to be further refined according to what studies can demonstrate.
References:
M Smith, A., Ferris, T., K Nahar, V. and Sharma, M., 2020. Non-traditional and non-invasive approaches in facial rejuvenation: A brief review. Cosmetics, 7(1), p.10.
Ruan, Q.Z., Chen, A.D., Tran, B.N.N., Epstei, S., Fukudome, E.Y., Tobias, A.M., Lin, S.J., Lee, B.T., Yeh, G.Y. and Singhal, D., 2019. Integrative medicine in plastic surgery: a systematic review of our literature. Annals of plastic surgery, 82(4), p.459.
Yun, Y., Kim, S., Kim, M., Kim, K., Park, J.S. and Choi, I., 2013. Effect of facial cosmetic acupuncture on facial elasticity: an open-label, single-arm pilot study. Evidence-based Complementary and Alternative Medicine, 2013.

You may wish to have a free informal visit lasting 20 minutes, to see the treatment room and briefly discuss how acupuncture could help you, and ask any questions.

To arrange a FREE, no obligation, short consultation about acupuncture for you, (20 minutes), please contact us at Shaftesbury Clinic.